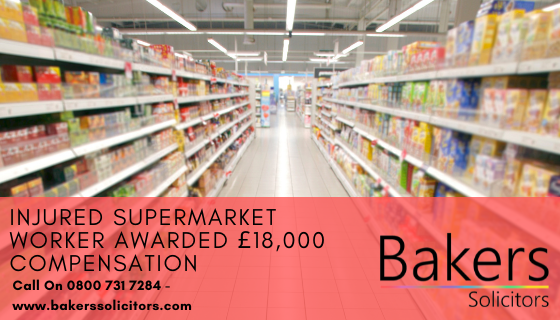 A supermarket worker who suffered facial injuries during his first shift at a factory unit in Wakefield has recently won his claim for compensation and has been awarded £18,000 in damages.

The 29-year-old worker had been hired through a temporary employment agency to work at the Morrisons supermarket production facility in Wakefield, Yorkshire as a stacker and picker. Initially assigned duties that included placing empty storage boxes and baskets onto a conveyor belt, within a few hours of starting work he was injured when several baskets fell from the conveyor belt from a height of approximately 10 feet, hitting him on his shoulder and in his face. The resulting injuries included a broken nose and two broken teeth, which required immediate emergency treatment.

Despite being a new worker at the Bradford-based national supermarket chain, the worker had received no formal training for his assigned tasks and had also not undertaken any form of company-wide induction; the only training or assessment the worker undertook was a basic maths and English test. In a statement as part of his claim for compensation for his injuries, the worker said that the incident was particularly nasty and that as his nose was broken and his teeth were damaged, it had also had a significant impact on his personality and confidence.

Commenting on the case, a spokesperson for the injured worker’s solicitors said:

“This incident had a substantial impact on our client as he was left in a lot of pain and discomfort for some time by the injuries caused. He needed dental surgery to extract a tooth and he was unable to sleep well for a long period. He also suffered psychologically due to the appearance of his teeth…In this case our client arrived at work and was met by another member of agency staff. He was shown to his overalls and taken straight to the factory floor…He was then directed by a manager at Morrison’s to begin work before any induction or training was carried out. Within hours he had been injured and needed taking to hospital for assessment and a tooth extraction. The major injury was to his front teeth; he went to a dental practice the following day as he was unable to eat and was suffering from a really bad headache.”

In responding to the claim, solicitors acting on behalf of Morrisons admitted liability in full. In addition to the award of compensation and payment for the costs of future dental treatment, Morrisons also offered their sincere apologies for their mistake and the injuries and upset caused.

This unfortunate incident once again highlights that even though a worker may be a temporary or agency member of staff, it is vital that they are provided with the appropriate level of induction, training and support for the tasks and roles which they will undertake.

At Bakers we pride ourselves on our experience and success in representing claimants who have been injured at work through no fault of their own, helping them to receive compensation that they are properly entitled to. Our professional, friendly team will give you an honest, free and 'plain English’ appraisal of your claim and we love to delight our clients when they receive the injury compensation they deserve.