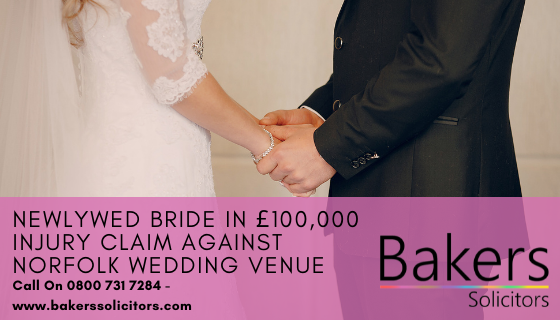 With Covid restrictions continuing to lift across most parts of the UK and with weddings in particular very much back on the agenda, a recent £100,000 claim for injury compensation has highlighted the need to make sure that wedding venues are safe for both guests and venue staff.

The claim in question has been made by Hellen Hetherington, who suffered the misfortune of falling down a flight of steps on her wedding night in June 2017. Her claim, recently filed at the High Court in London, states that she suffered serious leg injuries as a result of the fall at Sennowe Park, a stately home and wedding venue near Dereham in Norfolk. Her claim states that following an enjoyable and successful wedding day in the venue’s extensive grounds, the bride and groom were making their way back to the marquee on the lawn via a set of stone steps connecting two terraces when she fell. Mrs Hetherington’s claim blames the venue for her fall, which happened just before midnight on the day, as she states that the steps were not lit. The resultant leg injury was described as ‘serious’, with an ambulance being called. In the claim papers filed at the High Court, Mrs Hetherington’s solicitors state:

Mrs Hetherington’s claim also states that as well as ruining her big day, following the injury she required 24/7 care to help her recover and is still suffering from the symptoms of her injury almost four years later, including impacting on her ability to drive. In response, defendants Mr Charles Temple-Richards, owner of Sennowe Park, and Softley Events Ltd who organised the day have both denied liability. The defendants’ solicitors claim that it was a ‘pure accident’ which happened when her husband fell and dragged her down with him. Barrister Jamie Clarke, representing Softley Events, says an account from just after the fall by Mrs Hetherington’s husband showed it was an accident, saying:

In addition, Mr Temple-Richards’ legal team said the steps were over 100 years old and were a ‘period feature’ of the house and are claiming that Mrs Hetherington must have known they were there as she had walked up them to get to the bridal suite after the reception. They are also claiming that appropriate lighting was in place covering the steps.

The case reached court in May ahead of a full trial at a later date.

At Bakers we pride ourselves on our experience and success in representing claimants who have been seriously injured through no fault of their own, helping them to receive the compensation and rehabilitation that they are properly entitled to. Our professional, friendly team will give you an honest, free and ‘plain English’ appraisal of your claim and we love to delight our clients when they receive the injury compensation they deserve.