Pedestrian Crossing Accidents: are Pedestrians always Not at Fault? 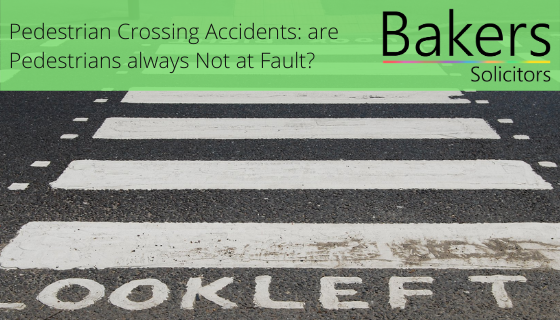 Designed to allow safe crossing of a road, street or avenue, in the UK there are a variety of different types of pedestrian crossings. Whether it is a Zebra (signalled), Pelican or Puffin (signalled) crossing, if a pedestrian is hit by a motorist or cyclist when using such a crossing, can they ever be deemed to be liable for causing the accident and how does this impact on any claim for compensation?

A case that went to court in 2002 highlights the importance of examining all the evidence available to establish who is responsible and whether the other party was partially or wholly liable for the accident. In the case in question, Goddard & Walker v Greenwood, Ms Goddard and Ms Walker were out jogging one morning along the pavement of a main A-road. Arriving at a junction on the road that featured a traffic light controlled pedestrian crossing, including the standard green and red illuminated person symbol for pedestrians, Goddard and Walker paused to cross but did not press the button that activated the pedestrian crossing signals. The 2 joggers began to cross the road toward a central reservation. As they did so, they jogged past a lorry that sounded its horn in warning. Ignoring this warning, they continued to cross the road and were then hit by a car driven my Mr Greenwood who had entered the junction and had been shielded from view by the lorry. Goddard and Walker both collided with Greenwoods car, and subsequently made claims against him and his insurance company for their resultant injuries.

With the claims going to court, evidence was presented from both sides. Ms Goddard and Ms Walker claimed that the traffic lights were on red when they decided to cross the road, and that as they ‘get loads of hoots from drivers’, they didn’t realise that the lorry driver was trying to warn them of Greenwood’s approaching but hidden vehicle. In presenting his evidence, Greenwood said that as he approached the junction, he slowed to around 25mph and changed lanes to move alongside the stationary lorry. He heard the lorry’s warning, checked to his left & saw the claimants crossing. Unable to take avoiding action, the collision then occurred.

Having heard the evidence, the judge did not accept the claimants (Goddard and Walkers) assertation that the traffic lights were on red when they crossed the road, stating that the lights were in fact against them and that their decision to cross was ‘extremely careless’. He also stated that they should have paused crossing the road when reaching the edge of the lorry to ensure that it was safe to continue. The judge also ruled that Greenwood’s actions were not negligent and therefore he was not liable or responsible for the claimant’s injuries.

The claimants decided to appeal against the judge’s original decision. Following this second hearing, the Court of Appeal decided that “the fact that the lights (facing Mr Greenwood) had by that time turned to green does not mean…that he was absolved from using reasonable care in proceeding across the pedestrian crossing”. In explaining further, the court said that as Mr Greenwood’s view of the junction was obscured by the lorry as he approached, he would have no idea whether there were any pedestrians on the junction. Also, as the lorry did not move when the lights turned to green, Greenwood should have been aware of possible danger in proceeding and should have anticipated the chance that pedestrians may have been crossing.

The Court of Appeal also stated that the claimant’s actions had played a significant part in them being injured, deciding that as they had not made sure that all lanes of the road were safe to cross their ‘contributory negligence’ would be assessed at 80%. As a result, Goddard and Walker would only be entitled to 20% of the personal injury damages that had ben awarded to them.

The case makes it clear that even if traffic lights are in a driver’s favour, this does not remove their legal obligation to exercise reasonable care and skill.

At Bakers we pride ourselves on our experience and success in representing claimants who have been injured through no fault of their own, helping them to receive compensation that they are properly entitled to. Our professional, friendly team will give you an honest, free and ‘plain English’ appraisal of your claim and we love to delight our clients when they receive the injury compensation they deserve.

If you would like us to handle your personal injury compensation claim, you can contact us online or by phone on 01252 744600 Read about some of our compensation claim success stories or key stages to making a claim