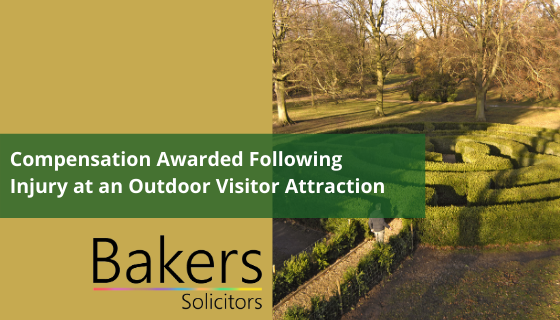 With COVID-19 restrictions currently being eased across all areas of the country, and with overseas travel and holiday plans looking likely to remain more complicated this summer, UK-based holidays, ‘staycations’ and day-trips are going to be very popular over the coming months. Organisations such as the National Trust and English Heritage are expecting record visitor numbers at many of their attractions, and whilst the vast majority of these visits will be safe and enjoyable, what happens should a visitor be unlucky enough to suffer from a bodily injury during their visit?

Back in April 2011, this is exactly what happened to a visitor to Carisbrooke Castle on the Isle of Wight. 59-year-old Oxfordshire resident Mr Taylor was visiting the historic motte and bailey castle, which is run by English Heritage and receives over 130,000 visitors each year. During his visit, Mr Taylor proceeded to walk along an informal path connecting an elevated artillery firing platform to a grass pathway below. Unfortunately, Mr Taylor lost his footing and fell over a retaining wall into the castle’s moat. His fall of approximately 3.5 metres resulted in him suffering a severe head injury.

Following the accident, Mr Taylor made a personal injury compensation claim against English Heritage. A core argument of his claim was that the area accessible to him was essentially dangerous and that he should have been warned of this danger by a sign (or signs). Mr Taylor's solicitors asserted that their client was effectively lured unknowingly down the path without fully appreciating the danger of a potential fall over a significant distance.

With English Heritage denying liability for the accident, the case went to court. As part of the hearing, the trial judge visited the castle in person to see for himself all of the factors involved. As a result, Mt Taylor won his case but was deemed to have been 50% to blame, meaning that his compensation amount was also reduced by 50%. English Heritage also appealed the judge’s decision at the Court of Appeal, making the case that if the decision stood, then both themselves and other similar organisations would have to put up a large number of additional and unsightly warning signs on their properties and that this would be against the wider public interest. However, this appeal was rejected by the Court of Appeal. The Court found that the risk actually taken by Mr Taylor was that he would lose his balance and fall on a steep grassy slope, but that the additional risk of falling almost 4 metres down a sheer drop was altogether far more serious and that there should have been a sign warning people about the sheer drop.

The Court of Appeal decision makes it clear that whilst the UK’s historic visitor sites do not have to be festooned with unnecessary and unsightly signage, the organisations responsible for the sites do need to assess each site on its merits and take reasonable precautions by placing warning signs at appropriate locations where the risks justify doing so.

At Bakers we pride ourselves on our experience and success in representing claimants who have been seriously injured through no fault of their own, helping them to receive the compensation and rehabilitation that they are properly entitled to. Our professional, friendly team will give you an honest, free and ‘plain English’ appraisal of your claim and we love to delight our clients when they receive the injury compensation they deserve.